If your garden is anything like mine, this is the time of year you see something growing up in your beds and wonder first, “How did that get there?” and second, “What is the best way to get rid of it?”

Luckily, most of these weeds can be easily pulled up and thrown away. I learned the hard way not to compost them, unless I want to see more of the weed in next year’s beds. I’ve also learned that the sooner I grab that sucker and toss it, the less likely I’ll be to see its children next summer.

Here is what I am battling. How about you?

Also known as Acalypha rhomboidea, this often ubiquitous annual weed can reach 12- to 24 inches tall. Part of the spurge (Euphorbia) family, it distinguishes itself with a clear, rather than milky, sap. “3SM” germinates when the soil warms in late spring and explodes with the arrival of summertime heat. In its first phase of growth it is unbranched, but once it reaches 8 to 10 inches tall it begins branching from the base. If crowded by others of its kind (because there is never just one), sparse branching can be seen. A shallow taproot and scattered horizontal branches make it easy to pull and come cleanly out of the soil.

If you leave this weed in your garden, the entire plant will likely take on a coppery fall color as the leaves die. Just know, if you enjoy this phase, you’ll also be enjoying many more plants next year.

3SM gets its name from the 3-segmented seed capsule that emerges after pollination. Each segment contains one tiny seed. The reference to mercury is to the god as the small bracts surrounding the tiny flowers fancifully resemble the winged feet found on statues of Mercury.

3SM can be found in disturbed soils everywhere east of the Rockies. As weeds go it is not as obnoxious as many because it can be pulled easily without stooping over or spending a lot of time digging out its roots. It should be removed early in the summer instead of waiting for the seed to mature. Mulching in late spring does an effective job of preventing seed germination.

Native Americans used parts of pokeberry weed in medicine and food, and many people  have put the fruit into pies & jellies or made what must be a dubiously sippable wine.

Pokeweed or pokeberry (Phytolacca americana) is a native plant that grows in disturbed soils, like garden beds. It is a perennial with a red, woody stem boasting long, oval leaves that may get up to ten inches long. Greenish flowers appear in July to September and yield to grape-like clusters of berries. While the berries alone can cause some distress, all parts of the plant are somewhat dangerous.

Manual removal requires deep digging in order to get all of the taproot. Pulling it will leave roots that regenerate. If you do nothing else, remove the berries before they can drop and spread. Each plant can produce 48,000 seeds that remain viable in the soil for over 40 years. Plus, birds that eat the fruit spread seeds in their droppings. So for your neighbor’s sake, don’t let that happen.

One safe way to use the berries is as a dye. A fuchsia to deep crimson color will result.

Prostrate Spurge is also known as spotted spurge or creeping spurge (Chamaesyce maculata and Euphorbia supina). Another of those Euphorbia weeds, it is a low growing, mat-forming, summer annual.

Not surprisingly, it thrives on harsh, sun-baked sites like compacted soils, sidewalks, driveways and paths. The leaves have a red blotch in the center and reddish stems that ooze a milky sap when broken. It’s a vigorous plant that can grow up to three feet in diameter if left unchecked.

Unlike Three Seeded Mercury, this weed is nearly impossible to pull up without first using a trowel or shovel to loosen the dirt surrounding the roots and then gently shaking off the soil. Another method would be solarization (putting plastic over it to bake it to death – and get any latent seeds). A salt and vinegar solution may work with a couple of treatments as this is a creeping weed. 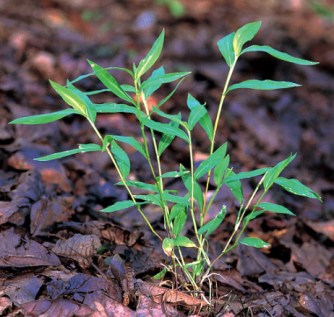 This grass was used as packing material for imported porcelains and first showed its stems near a landfill in Tennessee in 1919. It is now found in over 16 mostly east coast states from New York to Florida.  It threatens native understory plants by invading disturbed shaded areas like floodplains. The plant resembles bamboo and can grow 2 to 3 feet tall. It can spread by seed and vegetatively by rooting at joints along the stem.

The good news is that the grass roots are shallow and pulling up adult plants in summer before they drop their seeds will help with next year’s infestation. You can also apply corn gluten to prevent any missed seeds from sprouting when soil temperature reaches 50 F, which normally is around March. 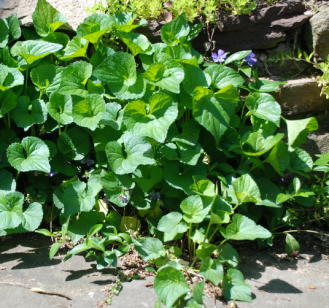 Wild violets (Viola papilionacea, Viola sororia, Viola pubescens, and other species) are a close relative of violas, pansies and Johhny-Jump-Ups, but are more devious and grow where you don’t want them to grow. Some people view violets as lovely woodland wildflowers, but for me they are a stubborn lawn weed that is resistant to all efforts to eradicate them except digging.

In addition to being a labor intensive pest, there is another disturbing aspect to these weeds. While they flower mostly in the spring and occasionally in the fall, during the summer and fall, they have secret flowers that never open but continue producing seeds. I did say devious.

When I first moved to my little house in the woods, my yard was entirely violets and privet. My mother had faced the same hurdle when she built her home in the 1960’s and told me how to best deal with my violet infestation. “Pour yourself a big glass of wine, grab your garden gloves, an asparagus fork and a paper bag. Go out into the yard and dig up violets until you either fill the bag or finish the wine. Repeat each day until the deed is done. It’s the only way to make it tolerable.”

Good advice for dealing with any of your summer weed infestations.

View all posts by thewellmanneredgarden